We love to celebrate the achievements of our pupils, both in and out of school! On this page you will get a snapshot of some of our recent successes... As part of our '20 Years of Integration' celebrations, our Year 7 children took part in an amazing 'Weathering the Storm' production.

We were delighted to find out that 'Weathering the Storm' earned us a special award for creativity as part of the Integrated Education Fund's Carson Awards! The Carson Awards are named in honour of the legendary Northern Ireland comedian the late Frank Carson and his son Tony. Frank was a passionate supporter of Integrated education and that continues through the Carson Awards. Sponsored by Tony, the awards are now in their eleventh year.

Mr Campbell, Mrs Wilson and some of our past pupils went to a special ceremony to collect our prize! 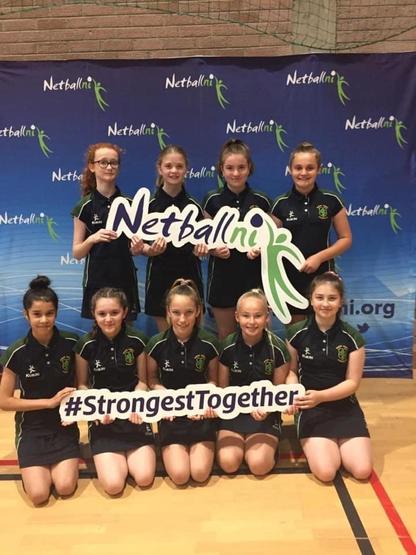 Our school Netball Team have enjoyed a run of success over the past few years. Take a look at some of their achievements:

Netball Champions of 2019 were invited to take on the high pressure role of ball girls at the Netball Europe Open Championships. They even got to meet the Northern Ireland and Wales teams!

Our 2018/2019 Netball Team also came runners up in the Under 15s Junior Team of the Year in the 2019 Ards and North Down Sports Awards for the second year in a row!

Our athletics teams have always made us very proud at local competitions over the years. Outdoor
Every June, the North Down Athletics Competition takes place at Bangor Sportsplex.

2019: A range of individual medals won in events including long jump, 100m, 200m, cricket ball throw and relays.  The girls successfully clocked up points to walk a way with First place overall. Amazing!

Indoor
Sports Hall Athletics takes place indoors in January.  As with outdoor events we have always done so well in this competition, frequently returning to school with silver overall!! 2019: After their performances and times, three children were chosen to represent our region in the Northern Ireland finals. Unfortunately with restrictions in place this event could it go ahead. But what an achievement to qualify!